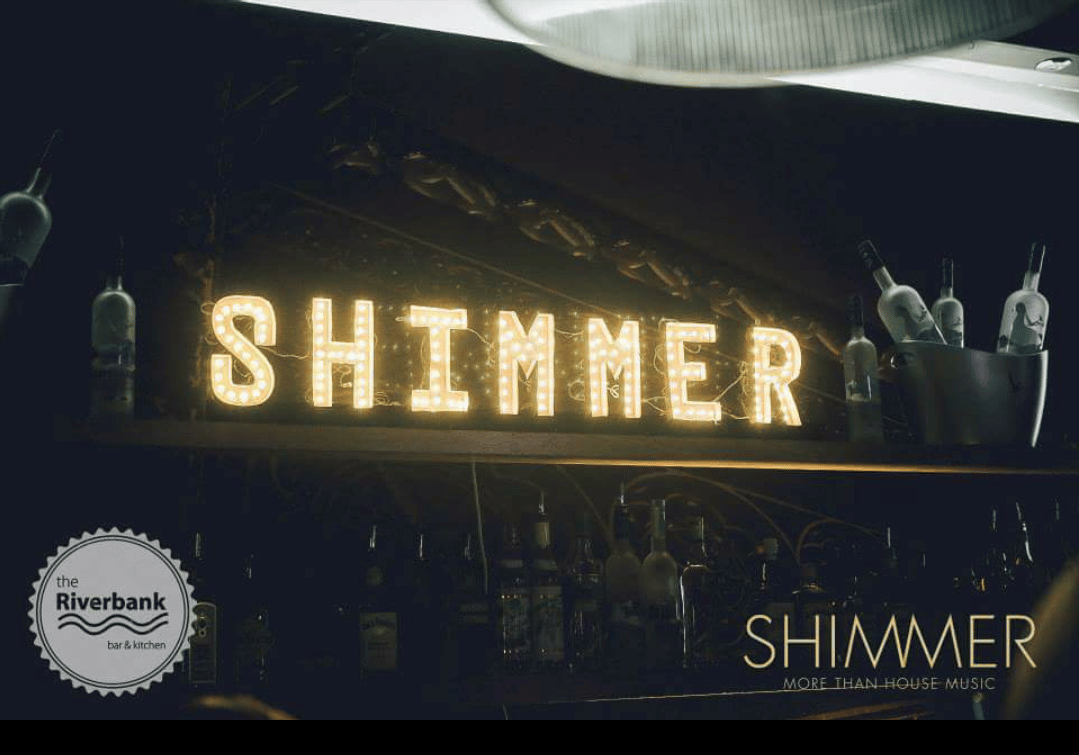 When I first saw the promotional video for Shimmer a month or so ago, I was intrigued. It showed a very moody collection of dark shots backed by The Kings of Tomorrow’s Finally, then moved into shots of the decks being fired up and a hints to a clearly remodelled Riverbank Bar, it was stylish and more importantly, it did its job and captured my interest.

I kept an eye on their Facebook page and it became apparent that their resident DJ would be Damian Wells. I became even more interested. I’ve made no secret of the fact that I really rate Damian as a DJ and he’s also a really nice and friendly guy as well which can be rare with DJ’s these days. I first met Damian last year when I was lucky enough to be invited to do a guest mix on his “Let there be house” show and really enjoyed myself. I knew we would be in for a treat and set about arranging being there for the launch.

When we arrived at the Riverbank, we were greeted by a friendly security team and (I believe) their promotions manager at the gate and after a brief conversation we went into the bar. The recent changes that they have made to the venue are even more impressive at night when it is set up for an event, and I’d definitely suggest that when you are there you have a little wander around the bar area as there are some little touches that you might miss, like the Shimmer “S” above the door, or the fact that the feather-ball lights are all connected to the main lighting rig so they all pulse in time with the rest of the lights. Little touches make all the difference! 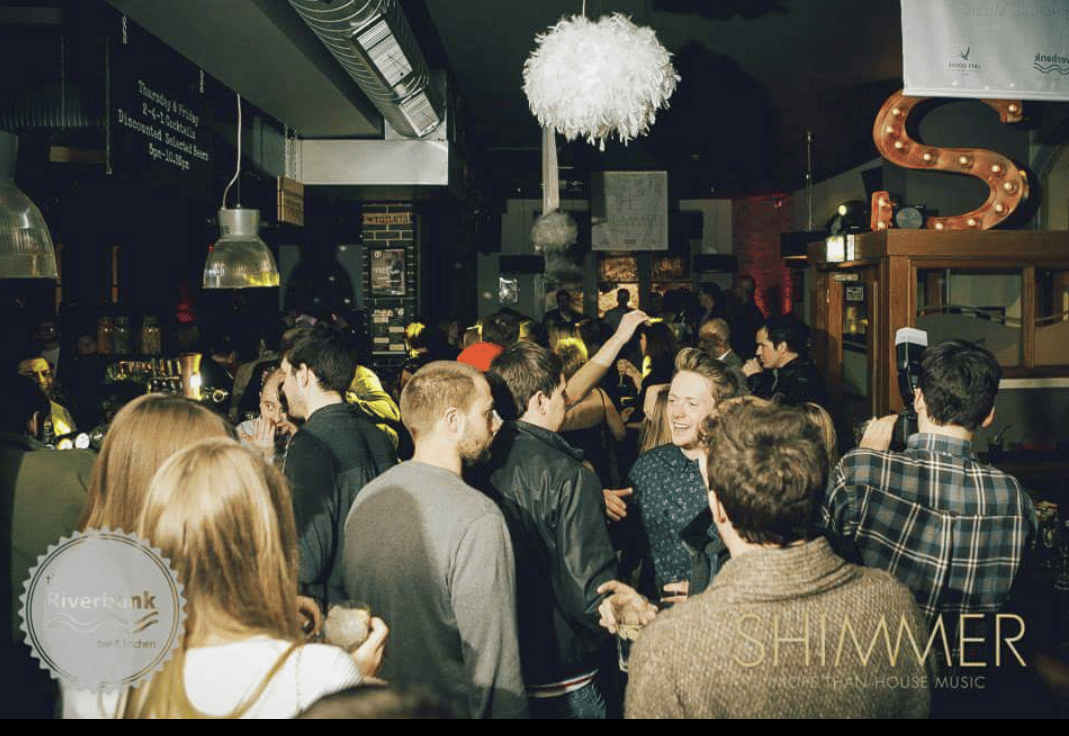 We moved over to the bar, got a drink and had a quick chat with Damian before he started, you could tell he was a man with a mission that night and he didn’t disappoint. 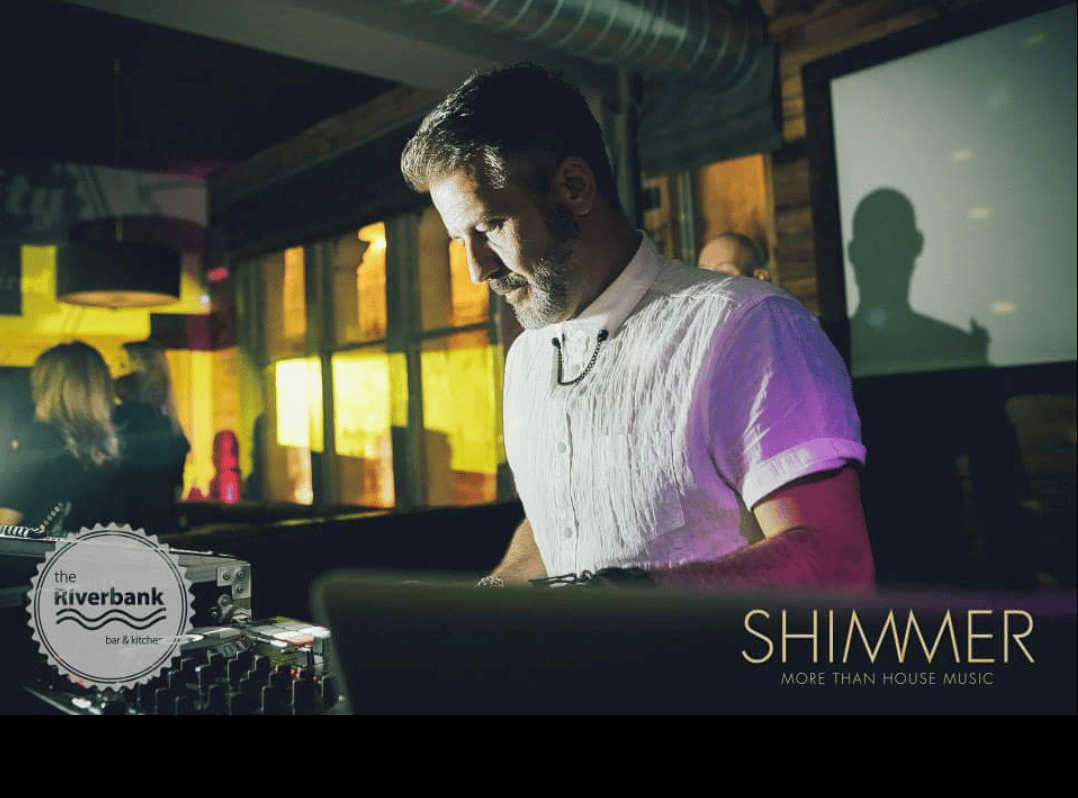 Damian started around half past nine and by ten pm the place was rammed. He played the whole night with a fusion of both upfront and House classics, funk and soul and the crowd reacted well, leaving DJ and crowd hand in hand to dance and enjoy the evening. And they did, all night!

There were some really stand out moments for me during Damian’s set. He dropped Degrees Of Motion’s “Shine On” and I though the roof was going to come off, the crowd reaction to that record was brilliant! He continued to play through the evening with a great collection of upfront choices from Disclosure and Clean Bandit, sprinkled with classics like Robin S’ “Show Me Love” Crystal Waters’ “Gypsy Woman” and Soul Central’s “Strings of Life” and then hit us with a funky house remix of The Jacksons’ “Blame It On The Boogie.” Again another great reaction to that record! Later on in the evening we even got treated to Luther Vandross’ “Never Too Much” as well which was a great choice in my opinion. As I sit back and think about the music we heard over the entire night, it gets hard for me to name more of the great tracks we heard as we heard so many of them and we were dancing all night. Damian was clearly enjoying himself all night and, as a DJ myself, that is great to see as it means they are in the zone, and they are enjoying the music they are playing which is a win-win for both the DJ and the crowd as the atmosphere only gets better when the two are in sync. There were a few times when I looked up and saw him singing his heart out and smiled as we were doing exactly the same thing on the dance floor.

You think that would be it, but it just gets better. When I heard my first set mixed by Damian a while ago now, I noticed that alongside the huge house tunes he was playing, there was a live saxophone! The two fit together perfectly, just like a band playing a jam session. When I realised there was a saxophone player there on Saturday night, I got really excited and an excellent set from Damian was only complimented by the inclusion of Ben Martin. Ben is a great saxophone player and none of us were disappointed by his performance. One of the standout moments for my group certainly was hearing him add his magic touch to Daft Punk’s “One More Time.” 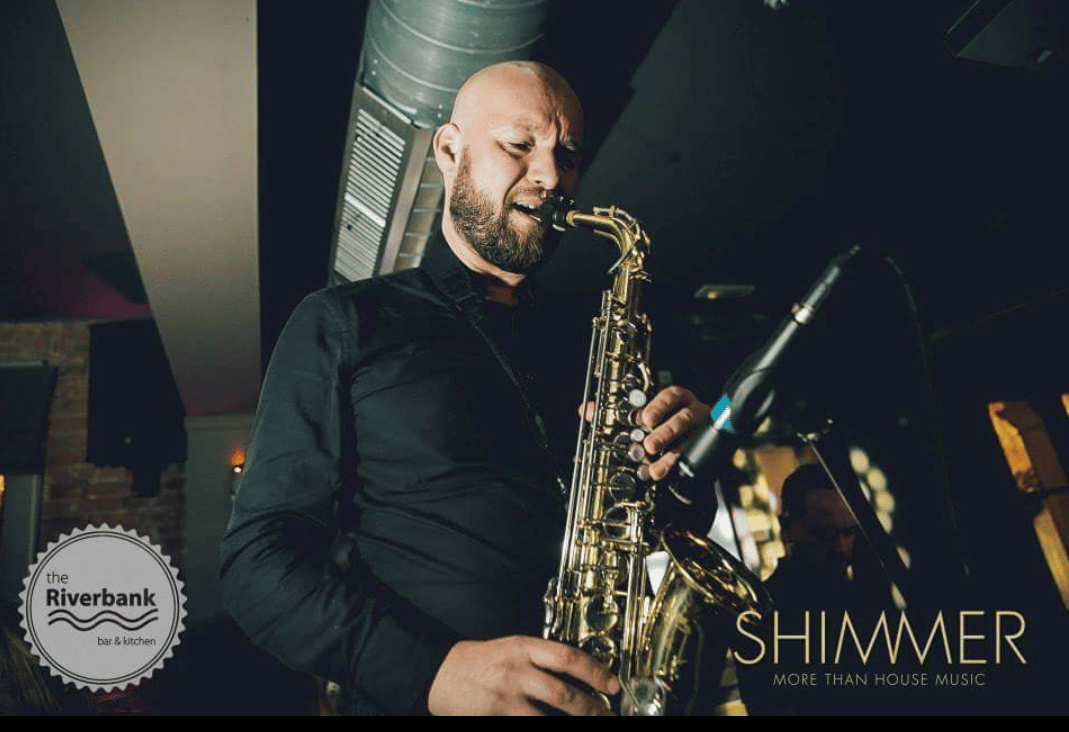 The thing that struck me during all of this was how friendly and up for it the crowd were. Now I’m sure the Riverbank wouldn’t disagree with me when I say that Shimmer is aimed at the discerning house music fan, most likely 25 to 45 age wise, but essentially people who love house music and know how to behave. I wouldn’t expect to see anyone shuffling there nor expect to hear any big room EDM tunes, just people feeling the music and dancing. As there always is on a busy dance floor, there were a few jostles, but people turned round straight away and apologised, shook hands and gave a friendly nod. There was absolutely no attitude there which is so rare in a venue these days and it felt like a haven paradise where there was absolutely no reason to have any concern about those around you. I will say at this point though, the extremely friendly security team we met as we entered did look more than capable of handing any issues should any occur though which is exactly what you need from a good security team. 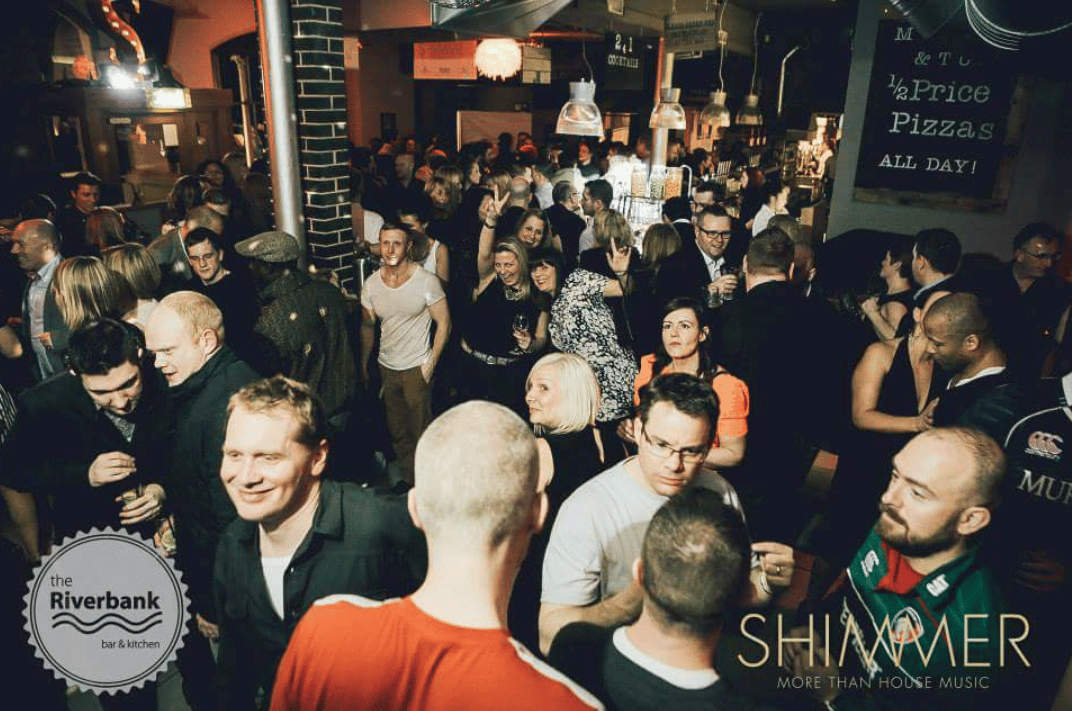 Another thing that never fails to disappoint Riverbank customers is their outdoor area. It overlooks Trent Bridge and the River Trent. It has plenty of seating and heating for the people to use as a chill out area (and smoking area of course) and I can only imagine the magic that that area will create as we move into the spring/summer and the better weather joins us. It’s a calm and peaceful area with a great ambience, most likely due to its backdrop of the river. There is also a sound system outside so you don’t miss any of the great records that are being played whilst you are out there.

I have to commend all involved in bringing Shimmer to the people of Nottingham as it’s a excellent night and I can only see it going from strength to strength. All the elements fell into place, their staff were polite and courteous, their drinks are fairly priced, their crowd was fun and friendly, the newly refurbished bar looks excellent, the atmosphere was brilliant and their DJ, Damian, is quite simply an awesome DJ.

As we left, the conversation between us was exactly as it should have been. We were planning our next visit. One thing I was really pleased to hear was one of my group (who is not a traditional house fan) say simply “The whole night was great, Damian was awesome and I now have a whole new respect for house music” and that is surely one of the highest compliments you can get as a DJ. Since that night I have found that that person is starting to get into house music! Another said that it was “so nice to enjoy going to somewhere with a grown up crowd and just party” and by that he didn’t mean age, he meant attitude. We all agreed that when you put The Riverbank and its staff, Damian and the crowd together, it makes a perfect mixture all rolled into one. They say all that glitters is not gold, my advice to the people of Nottingham is if it Shimmers, pay attention!

I’d urge anyone to go and check out Shimmer, they really have put on a night there which will stand toe to toe with any other house night in Nottingham be it club or bar, and once you have experienced it, I’m sure you’ll see what all the fuss is about.