For fans of well-crafted, sun-soaked tunes, look no further than German producer Flashbaxx and his latest mini-album “Take Care My Friend.” Inspired by Flashbaxx’s deep love of jazz-funk, the album is brimful of feel-good vibes, catchy melodies, and unforgettable songs. We sat down with the man himself to get some insight into the tracks from this stunning album. He talked us through all the tracks so sit back relax and enjoy these musical insights by Flashbaxx.

Was written and recorded in one night from beginning to end. The result was a clean sweep- everything turned out perfectly. The song has a warm and organic vibe with a squeeze of Latin sound that instantly hooked listeners. Producer Flashbaxx was inspired by the song to limit himself to the instruments he used when recording it. Every song he produced after that one has the same setup. This self-limitation allowed him to focus on each instrument and get the best sound out of it. He also decided to sing on this track, something he had never done before. The final version of the song is raw and vintage, with the creaking of floorboards and the sound of Flashbaxx moving the piano in the background. “Alright” is undoubtedly his most personal and musically ambitious song to date.

Music is an interesting thing. It can be valuable, a tool, or just merely music. But what exactly does valuable mean? Should all music be valuable in some way? According to the author, valuable means that the music should not be a DJ tool, but rather something that DJs listen to privately. So he wanted to change to a 7/8 beat for this number to make it feel good. He also believes that when working on an album, one should listen to the tracks or drafts in order and then rearrange the track list accordingly. This is how “It Just Happens” came to be. What do you think? Is all music valuable? Can any song be a tool if used correctly?

I’ve been friends with Kathrin for a long time and I produced her first EP. Unlike me, she is a brilliant singer and songwriter with the ability to write very deep lyrics. I’ve always wondered how she sounds on a jazzy soul track. Actually, this version is a remix. The instrumental that Kathrin Kempf sang on sounded completely different. It was more of an MPC beat. To adapt the music to the record, I wrote a completely new arrangement and adapted the vocals to it. STRANGERS had a deceptive almost hopeless atmosphere to me. It’s not a happy song. A few of my lines actually made it into the song, but Kathrin just nailed the lyrics. If I remember correctly, she was struggling with her relationship at the time and you can hear that emotion pretty clear on STRANGERS. It became a song growing with each minute passing without being pathetic and not even having a hook. What I like most aboutSTRANGERS is that you can feel the hurt in Kathrin’s voice. She sounds vulnerable and exposed, but also strong and determined. This is what makesSTRANGERS such a powerful and moving song.

Brooklyn Loveboat is about that wonderful time I had in NYC and the mood I had when I was on my own in the city that day. Riding the subway where I recorded the incoming train and the ride from Manhattan to Brooklyn and back with my field recorder. Coincidentally having a slice of Pizza at Stromboli like the one on the cover of the Beastie Boys Book and having dinner at Momofoku Ko. I never understood why people always make such a fuss about New York until I had been there for the first time. It’s just an amazing place with so much to offer. The people, the food, the sights, it’s all just incredible. And, of course, the music. There’s just something about New York music that speaks to me. Maybe it’s because I grew up listening to hip-hop and punk rock, two genres that were born and bred in New York. Or maybe it’s just because New York is such a melting pot of cultures that you can’t help but find something you love. Whatever it is, I fell in love with New York from the moment I arrived, and “Brooklyn Love Boat” is my love letter to that beautiful city.

I was inspired to write this song after taking a trip to New York. I found a great loop on the album “Mindful” by the band “Maxayn” and knew that I could create something special with it. I abandoned the original concept for the song and just jammed out with the loop. I tried other approaches with more structure, but always came back to the very first version. Usually, I’m very detail-oriented when producing and writing, but this song was different. Every instrument you hear on TAKE CARE MY FRIEND was just a draft. It was perfect for me.

One day, as I was walking by my Rhodes keyboard, I mindlessly punched some keys and came up with the first chord of the song. I literally sat at my keyboard for weeks, working out the right licks and the right feeling, until I had the song just the way I wanted it. Chris Pookah, a singer-songwriter from Glasgow who has lived in Aschaffenburg for a few years, was my first choice as vocalist. I liked his debut album a lot, and when I presented him with the lyrics, we worked together in my studio to develop them into this wonderfully warm piece of music with all its twists and turns. The perfect end for the record.

If you’re looking for an album that’s guaranteed to raise your spirits and put a smile on your face, look no further than German producer Flashbaxx and his mini-album “Take Care My Friend.” An ode to friendship and sunny days, this album is sure to become a summertime favorite. It’s available as digital or vinyl format through his Bandcamp page. 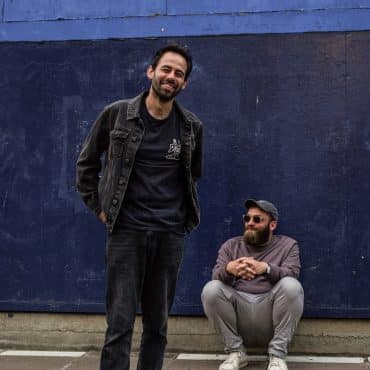 Q&A with Athlete Whippet and the Talk About This Love EP on House of Disco.

Athlete Whippet is a great artist duo who just released their first EP “Talk About This Love” on the House of Disco label. I had the opportunity to talk with […]